The idea for the first ecovillage in Denmark was brought to life in 1982 by five people who were inspired by the teachings of the Danish spiritual philosopher Martinus. They wanted to create a different society based on spirituality, vegetarianism, self-sufficiency, with a positive impact on the environment, a conscious use of resources, local jobs and a multitude of social activities.
This meant that we right from the very beginning in Økosamfundet Dyssekilde have thought and acted according to these principles.

• Work with nature, not against it
• Create systems that produce more energy than they consume
• Work for the regenerating of the earth
• co-operating through interdidisciplinary networking
• Unite local circulation of matter

In the light of this the personal responsibility of our actions plays a great role in our community. It is also reflected in our everyday life today, as there is direct consequence of what I pour down the drain, how I sort out my waste or how I act towards my fellow citizens in the village.
The village and the ideas have changed enormously since they were first conceived. The common foundations are now more focused around ecology, sustaiability, respect and tolerance.

A rough history of the village looks like this:

Økologisk Landsbysamfunds Kommanditselskab (ØLK) is founded and a year later it buys the farm Dyssekildegård with additional buildings and 13 hectares of land. 10 adults and 5 children move in on the farm, and a district plan is made for the area.

1990
The first houses are built on the former potato field, and a year later the first people move into their homes. The adults also start a private kindergarten.

1992
The kindergarten becomes a public institution and moves to one of the farm buildings, it is named Torup børnehave, it is still running and facilitates 25 children, most of them from the village.
At the end of the year the first 6 flats are ready to be rented out.

1994
(More flats are ready to be rented out, and private houses are being building left right and centre.

1999
ØKL becomes Økosamfundet Dyssekilde, and has grown to 71 adults and 35 children. 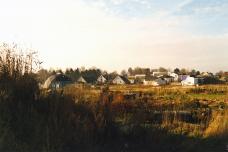